A Quick Overview of Myomectomy Surgery

The Myomectomy procedure is a procedure that is focused on the removal of Uterine Fibroids, also known as Leiomyomas. These are very commonly occurring in women. Uterine Fibroids are non-cancerous growths appearing in the Uterus, most often during the child-bearing years. However, these can affect at any age. This surgery aims at treating or removing these fibroids and then reconstruct the Uterus. The surgery is performed by making very small incisions in the abdomen and a viewing tool is used to get a clear view of the exact problem area. This approach is considered very safe and fruitful in the treatment of Fibroids, which are of about two inches and have grown on the outer region of the Uterus. 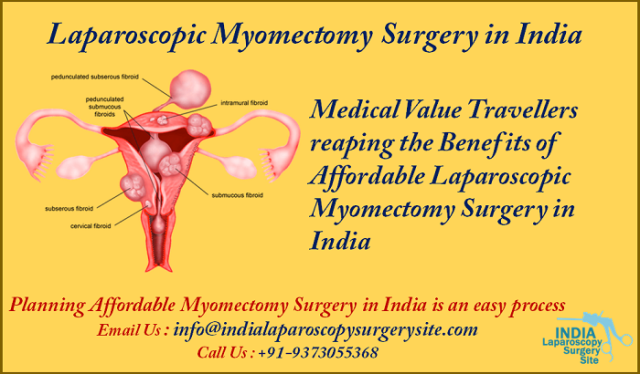 Like any health condition, if delayed, even Fibroids can become very problematic. In fact, delaying timely treatment for Fibroids can affect the Fertility in women. This happens because Fibroids create obstruction in the Fallopian Tubes and also bring symptoms such as severe pain in the Abdomen, long and painful periods, heavy menstrual bleeding and many other such difficult symptoms. In order to treat these,

Laparoscopic Myomectomy is the best cure for Fibroids as it provides relief in the following ways:

What to expect after Laparoscopic Myomectomy Surgery?

The patients can expect immediate relief from the burdening symptoms of Fibroids. It takes about 2-3 weeks for complete recovery after the Laparoscopic procedure; whereas the Abdominal or Open Myomectomy needs about 4-6 weeks for a complete recovery. The patients are restricted from indulging in heavy and weight bearing activities such as running, lifting heavy objects, driving, climbing stairs, and other strenuous exercises are a strict no-no after this procedure. The patients may also be advised to avoid intercourse and use tampon, till the recovery phase is over. Furthermore, it is better not to attempt conception till three months after the surgery. This is because there are chances of miscarriage.

A surgery like Myomectomy is a very intricate and sensitive as it is dealing with very delicate organs of a woman’s body. For maximum outcome, the success of this surgery is very important. In this matter, India is a role model for many countries as the success rate of this surgery is very appreciable. Reports show that after undergoing Laparoscopic Myomectomy in India, the patients have reported maximum relief from the health condition that they were suffering from.

This coupled with very low Laparoscopic Myomectomy cost in India, the international patients are more than happy to get this surgery done in India.

By providing the most cost-effective treatment opportunities, India has acquired a very sought-after position as a medical tourism destination. Amongst the countless foreign nationals, who are opting for India for treatment, there are many, who come from a very underprivileged background. For such patients, India is a major source of cost relief. More specifically, with affordable Laparoscopic Myomectomy Surgery in India, these patients are able to avail such advanced procedures without much hassles. The cost difference is a lot between major countries like UK or USA, and other countries too. In India, this surgery costs only $3,600, while the same surgery costs a whopping $42,000 in USA.

There is no doubt that the surgery is very beneficial and thus, the demand is very high. But owing to the shortages of apt healthcare services in many countries, the population of such countries have to step outside their countries to get the cure. This is how India is seeing a steady influx of international patients, particularly looking for affordable Laparoscopic Myomectomy Surgery in India. For such patients, the presence of India Laparoscopy Surgery Site group is immensely beneficial. This group has very well-crafted plans and packages, which include very low cost of Laparoscopic Myomectomy Surgery in India, along with many other treatment facilities.

Book Your Immediate Appointment At Email ID : info@indialaparoscopysurgerysite.com Or Call Us On: +91-9373055368